In the week from June 11th to 18th, 2009 S/Y Sea of Joy sailed with a very ambitious couple, Elisabeth and Andreas Haemmerle, in rather strong winds south of Samos.

Leaving Marina Pythagorion we sailed to Ns. Samipoula and then southwest to Fourni, where we pulled up alongside in Fourni Harbour and enjoyed delicous lobster and fish dinner at Miltos Taverna. Next day we sailed southeast to Lera Lipsi, a beautiful bay in the southeast of Ns. Lipso, where Andreas cooked a fabulous lamb in the oven.


The third day brought us to Skala Patmos, where we met S/Y Charisma, a catamaran skippered by Karl Hitschmann and his crew.

After a visit to the monastery we had a good dinner with our friends. Next day we sailed southeast to Ormos Pantelis on the East coast of Leros, where we anchored and enjoyed a superb dinner and view at Dimitris Karaflas Restaurant.


Next morning we visited Leros Castle and then sailed to Marathi in the Arki archipelago, where we had an nice dinner with the crew of S/Y Charisma at Pandelis. The last day we sailed back northeast to Pythagorion Marina. The last five miles we had a very hot and strong notherly wind. We had our last dinner in the Marina at the excellent "Steak House", with the award-winning cook Mama Anna and grill-master Andreas served couteously by Heleni and Philip. 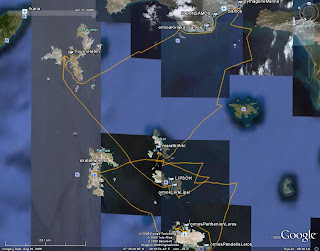 We logged 175sm on this eventful and harmonious cruise. You may download our track in gpx-format or view it directly on Google Maps. 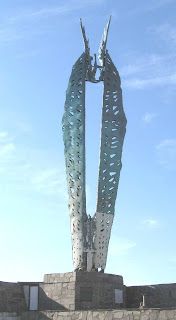 From 4th to 11th of June 2009 we did a nice spring cruise. We started in Marina Pythagorion, rounded the East of Samos tacking in nice winds and anchored in Kokkari for a good dinner. Next day took us westward to beautiful Megalo Sheitani Bay and then to Agios Kirykos, Ikaria, where we were the only sailing boat this night. 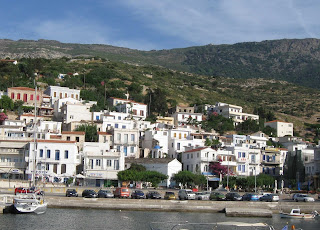 We continued westwards to Mikonos and spend the night anchoring in nice Elia Bay and then sailed back to quiet Stavros Bay in Patmos. Next morning we anchored in Skala Patmos to visit the monastery and continued to Marathi Island in Arki, where we had a nice dinner at Pandelis. The last leg was back to Samos, where we had a nice last sailing on the South coast to Marina Pythagorion. 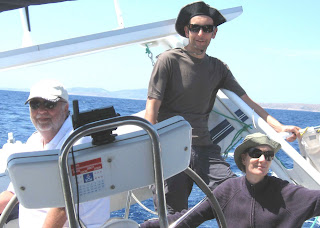 My attentive and competent crew:
proved themselves very seaworthy and seemed to enjoy this 218sm cruise. In addition to being good sailors, Stefan is chairman and Richard crew member also on board of the advisory committee of the Austrian Internet Foundation's sponsoring project "netidee" .
You may download our track in gpx-format or view it directly on Google Maps.
Posted by Rupert Nagler at Saturday, June 20, 2009 No comments: