On Friday 26th July 2009, after having cleared police, harbormaster and customs, S/Y Sea of Joy left Pythagorion harbor through at noon and tacked against westerly wind to , where we finally moored near midnight. 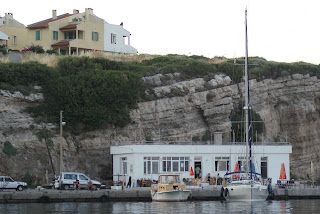 Next day we bought the Turkish travel log at the marina office and worked through the tedious entry formalities, visiting police, customs, health control and harbormaster in Cesme. At noon we left north and reached Kavurlukoz harbor, where we were the only sailing boat. The owner of the harbor restaurant started his barbecue and prepared for us a tasty lamb and chicken dinner. 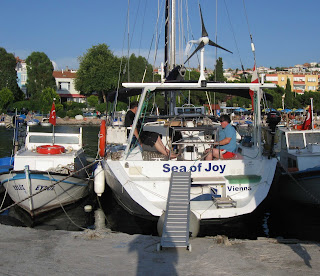 On Sunday we visited Eskifoca, stopped for a swim in beautiful Bademli Channel, nearly got stuck in heavy silted Bademli harbor, and finally squeezed in between small fishing boats in Dikili harbor, where we enjoyed fresh grilled fish at the local harbor restaurant.

Monday morning we restocked our provisions and continued north with weak westerly winds, explored the wonderful Ayvalik archipelago and moored in Adibey harbor, climbed the hill to the old windmill and dined at the famous Bay Nihat restaurant. 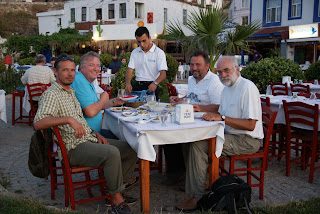 We left early Tuesday morning, followed some dolphins near the northern coast of Lesbos, turned north at Babakale and reached Bozcaada harbor, where we enjoyed a swim in clear water and a tasteful dinner at Yakamoz restaurant.

Wednesday we started before dawn to make as much way as possible through the . In weak winds we kept to the south side and explored a maximum current of 2.5 knots near Canakkale at noon. When the wind grew stronger from NE we could tack our way through the northern part of the . 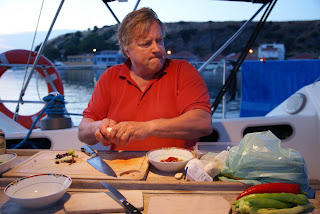 We anchored in the quiet , where Gerhard prepared his famous “spaghetti con aglio, olio e pomodoro” . 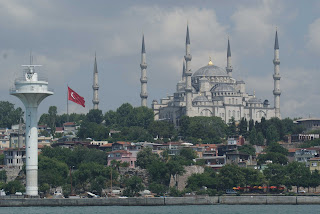 Nice north easterly winds continued on Thursday, so we could sail the whole day in the , visiting beautiful Pasalimani and tacking on the northern coast of the Kapidag peninsula, sometimes accompanied by a swarm of friendly dolphins. We spent the night anchoring in Cakilkoy harbor.

Next day we started early sailing further east. When the wind grew weak, we motored NE right to Atakoy marina.

On Saturday we made the usual Bosporus trip, passing the famous Blue Mosque, 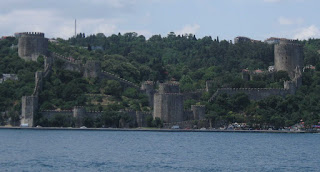 then , Dolmabahce palace, and finally Rumeli castle up north

Turning south on the Asian side back via Beylerbeyi to Ueskuedar, passing Kiz Kulesi to Fenerbahce Marina. 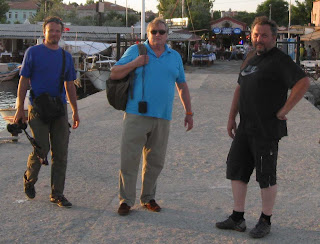 As a total we logged 485sm for this cruise, which took us 88 hours of sailing in 9 days. My ambitious crew made this possible: Congratulations and thanks to Albert Burgstaller, Gerhard Heumayer and Kurt Drexler (from left to right) !

You may download our track in gpx-format or view it directly on Google Maps.
Posted by Rupert Nagler at Tuesday, July 07, 2009 No comments: