On Saturday, 1st of May the first two crew members arrived in Samos by plane without problems (neither vulcano-ash nor strike): Gusti and Richard Stastny. They helped me to ready  the boat and to hoist the genua. On Sunday 2nd we sailed with light northerly winds to Fourni, where we were friendly received by police and coastguard. After a detailed inspection of boat and papers everything was fine and our travel log was stamped twice: one for entry and one for exit of Fourni harbour. Having completed formal duties it was a pleasure to stroll round Fourni with no tourists and then having our traditional meal of lobster & fish at Miltos restaurant. 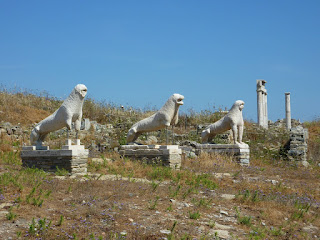 Early on Monday  3rd we continued west with no wind at all south of Ikaria and Mykonos to Rineia, where we anchored in the quiet South Bay and enjoyed an onboard-dinner with spaghetti aglio&olio.

Tuesday 4th morning we motored back 2 miles to Delos, where we anchored in Delos channel. We made our dinghy ready, but the outboard motor did not start - there was oil in the combustion chamber, which I could not remove. So we rowed to the landing site and enjoyed ancient Delos with only few tourists. 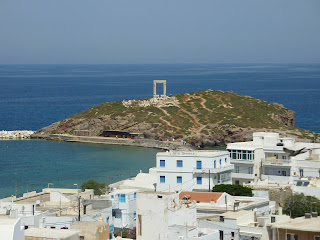 After noon we sailed south to Naxos harbour, where we found a free mooring space directed by the friendly harbour manager, Mr. Kostas. He also organised the service of our outboard engine by Mr. Michailis. So we had a full day to visit Naxos town, archaelogical museum, Della Rocca-Barozzi Venetian museum and the island's landmark, the unfinished temple of Apollo. We also replenished our supplies in Atlantic supermarket and visited two good restaurants: Maro's and Mezze2. There was a national strike announced all over Greece, but in Naxos everybody worked as usual, only the Greek national bank was closed.

Thursday 6th we continued south, visited some nice bays in the south of Naxos, where we found a nice new harbour in Ormos Kalando. Then we cruised round the "small cyclades" (Schinousa, Koufounisia and Keros).
With a light north wind we sailed futher south, where we anchored south of Ios in quiet Manganari Bay. Gusti prepared a sumptuous hefty dinner with potatoes, onions, tomatoes, peppers and eggs. For dessert we had lots of pancakes with apricot jam. 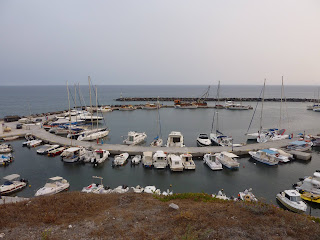 In the morning of Friday 7th we sailed south, entered the Santorini caldera from north and made a roundtrip via Oia, Fira, Arthinios and Akrotiri to the south western cap. As suspected, no anchoring was possible. We continued near the southern coast, where we found nice bays and finally arrived at Vlichada Marina. There were heavy dregging works in the narrow entry, but we lifted our keel and soon were safely in the round harbour, where helpful harbour manager Mr. Minas assigned us a mooring space near various fishing boats.
For the evening we went by taxi to Monolithos for a stroll on the beach to the excellent restaurant Mario No.1, where we had an exceptional good and juicy dorade for the three of us. 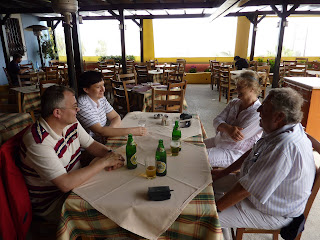 Saturday 8th the other two crew members arrived by plane without problems: Bogda & Wolfgang Schwabl.
We visited Thira, took a bus to Emborio and had a nice walk through Santorini's volcano wine gardens back to Vlichada. Richard hiked a car, so we skipped the last half hour of walking downhill to the marina. Dinner was at Dimitrius restaurant with a nice view over the marina. 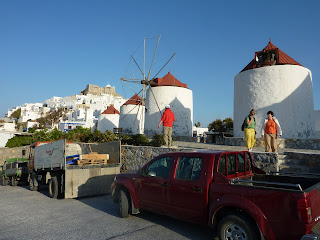 Very early on Sunday 9th we set sail with a northwesterly 5-6 bft wind, always nice from the side, via Anafi and finally arrived in Skala Astipalaya. We climbed up to the Venetian castle, strolled along ancient wind mills around the nice and quiet town, and finally had dinner at Maistrali restaurant.

Early on Monday 10th we visited a lot of nice bays in the south of Astipalaya. Again a 6 bft north-west wind carried us directly to the west coast of Kalymnos, where we took a very reliable iron bouy in Emborios Bay. After a nice evening walk we had a very unusual good mezze-dinner at Harry's Paradise restaurant. 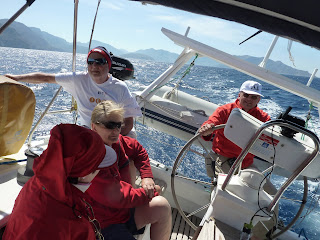 Tuesday 11th we sailed to Patmos, having to tack for the last part. But we arrived in time in Skala Patmos, so that Bogda and Wolfgang could visit the monastery and the apocalypsi cove. Dinner was on board: "vegetables au gratin" - celery, potatoes, tomatoes, peppers, onions, courgette with parmesan and a nice sauce bechamel.

On Wednesday 12th we sailed round Arki and then took a bouy at Pandelis in Marathi Bay. After the usual afternoon walk with the goats round Marathi Island we were friendly received by the Pandelis family and had a very good dinner as usual. Mr. Pandelis built a new terrace and has more flowers in his garden than ever. 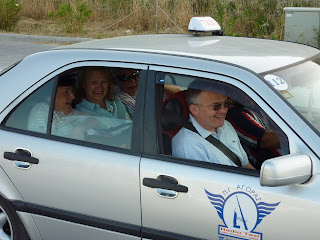 Thursday 13th we had to motor back to Samos Marina, where the crew enjoyed first a desparately longed for hot shower and then good dinner at Samos Marinas Steak House. Early on Friday 14th my crew left by plane via Athens back to Vienna.

For me it was a beautiful cruise about 400sm and 69 sailing hours with two nice couples. Richard and Wolfgang are members of the advisory committee for the "netidee" founding program, which is presented by the Internet Foundation Austria.


You may download our track in gpx-format or view it directly on Google Maps.