Sailing around Crete in October 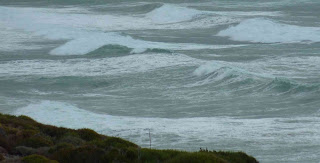 Sailing around Crete is a challenging experience, especially in often changing and rough weather conditions end of October. So I did this cruise with a very experienced crew: Christiane and Gerhard Rothfuss and sailing doctor Gerhard Westphal from October 17th to 28th 2010. 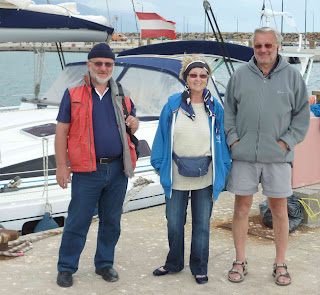 We started northwest from Ag. Nikolaos on Sunday afternoon, 17th October, rounded Ag. Ioannis Point and stopped for the night in Milatos harbor, having excellent fish at Socrates Taverna. In strong southerly wind and heavy thunderstorm we continued to Heraklion harbour, where we found a mooringplace on the western side of the ferry harbor only. After a good dinner at Peri Orexeos Restaurant and a night with a lot of swell we proceeded to Rethymnon. With some problems regarding defect mooring lines we got the last place alongside in the so-called "marina".

Under clear sky and warm sun we set sail to round Akrotiri peninsula on October 20th. At noon we were stopped by a Nato-boat called "Firing Control" and escorted to Marathi north of Souda bay. We had to wait there safely at anchor until the Nato firing exercises with a lot of fighter-jets, drones and target-ships were finished at 3pm local time.  Interesting was that nobody announced those exercises before on VHF 16 or 12 as specified in the pilot guides. So we arrived late for a meeting with some friends in Chania harbor at 9pm. 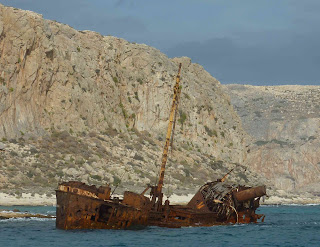 Thursday we tacked against strong south-westerly winds to the lonley bay of Garamvousa, were we anchored alone in the South Bay near the most northwestern rock of Crete. In this solitude Gerhard Westphal concentrated and cooked his legendary "Erdäpfelgulasch" for us. Thus invigorated we could continue next morning south on the west coast of Crete, rounded Elafounisi and finally went alongside in Paleochora harbor. We took a walk round this nice village and had delicous dolmades and tasty lamb chops at Dionysos Taverna. 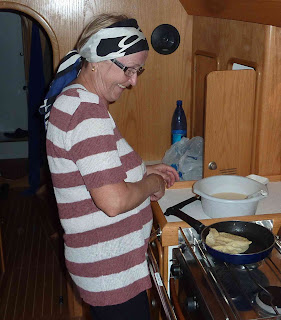 North winds increased during the night. So we had to leave by motoring "in to the bow-spring-line" / "Eindampfen in die Vorspring" and sailed east with varying northeast- & northwesterly winds along the south coast of Crete until in the evening we stopped at the secluded Bay of Kali Limenes. There Christine cooked a lot of pancakes, each of them disappeard as soon as it was delivered to the hungry crew. Sunday 24th we continued further east to Ierapetra, where we anchored near the city quay and replenished our provisions.

As strong southerlies were announced by Olympia Radio we hurried round Ns Kavaloi, the south-eastern tip of Crete and anchored in the large bay of Kato Zakros, where we hoped to get some lee from soutwest winds. We took a walk to the Minoan Palace of Zakros and into the impressive Gorge of the Death. Then we had nice lamb chops at Nikos Restaurant. In the night the swell became very strong. To avoid damage we had to leave Tuesday 26th at 5am and sailed north in up to 36 Bft south wind with a lot of rain. So at sunrise we rounded Cap Sídheros north east of Crete and before noon went alongside the north-east quay in Sitia harbor and had a late breakfast. Then we went for a walk round Sitia, visited Fort Kazama, and had a delicous Psarosoupa at the new O Mihos restaurant.

Next morning with much less wind we sailed to Spinalonga Bay, visited the Venetian fort and later leper colony and spent the night at anchor near Elounda. Sea of Joy was rinsed clean by a long and intensive thunderstorm during most of the night. Thursday 28th we finsished our cruise round Crete with the last short leg back to Ag. Nikolaos. 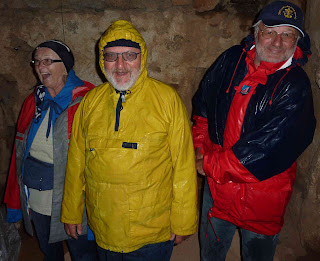 My nice crew helped me taking down the genua and prepearing Sea of Joy ready for the winter. Friday 29th a lot of wind was announced. We took a roundtrip by car visiting Lato, Moni Exakustis, Myrtos, Ierapetra, Praisos, Moni Tuplou and having a good fish for dinner at Ta Kochilla restaurant in Mochlos harbor.

This was a challenging cruise round Crete in 11 days, we logged 407sm sailing 76 hours. You may download our track in gpx-format or view it directly on Google Maps.
Posted by Rupert Nagler at Saturday, November 06, 2010