Having seen the Ligurian coast by car last year, my wife and I decided to cruise along this coast, which has not many secure bays to anchor but has many scenic sights.

So July 7th we boarded Sea of Joy in Imperia and had an exceptional dinner at Agrodolce. In the meantime Rossana Zaoli had brought our new mainsail, which we tested sailing to Loano next day. It is a full-batten main with three reefs and we are very happy with it. In Loano we moored in the marina and ate large platters of smoked fish and local hamin a small street in the old city at Portichetto restaurant. Next day we sailed further east to Arenzano, moored alongside in the small harbor and savoured a tasty fish menu at Ochin de Mar. 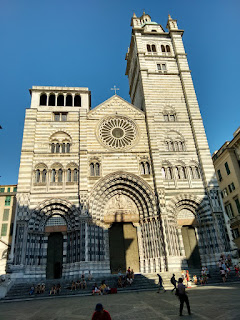 On July 10th we sailed into Porto Antico in Genua passing the rusty wreck of Costa Concordia and moored there for two days visiting the precious churches, markets, aquarium and marine museum, art museums, and at Palazzo Ducale-Appartamento del Doge a very rare exhibition of expressionist paintings from Kirchner to Nolde. We had fish dinner at Soho and tasted local cuisine at Vegia Zena.


After our visit to Genua we motored along the picturesque coast passing San Fruttuoso into Portofino and anchored underneath Abbazia della Cervara and cooked pasta al tonno. Next day we continued to Sestri Levante, where we anchored between beach and harbor, visited the nice city and castle, replenished our provisions, and had nice fish dinner at the traditional San Marco restaurant. 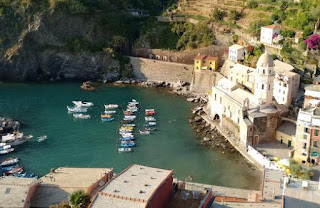 July 14th we entered the coast of Cinque Terre and moored at a bouy in front of Vernazza. By dinghi we entered the small harbor, visited the castle and had dinner at Vulnetia. 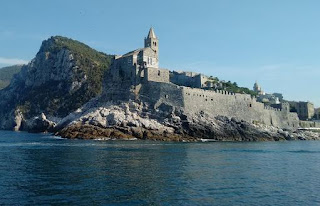 Next day we continued east along Cinque Terre and finally anchored near the harbor of Porto Venere. After a long walk and a visit to the wonderful church of St. Pietro we had a very special dinner at Portiveni. Sitting at a very small table in a very narrow street we had fantastic mussels with parmiggiano, salads, and a great glassy filet of San Pietro.

At 3am on July 16th we started our way back west across the Ligurian sea and reached Santo Stefano al Mare, where we moored for two days in Marina degli Aregai, having the zip of our lazybag repaired by Zaoli Sails, strolling and swimming at sandy beaches and having nice dinners at Il Sandolino and La Cucina. We continued west to the nice bay of Ospedaletti, where we anchored for two days and then sailed west to Monaco, 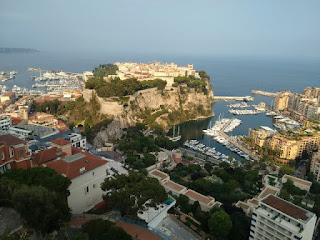 In Monaco we moored at Port Fontvielle. We visited the Botanic Garden, the famous Aquarium, the Castle, and the old city, where we had a remarkable dinner at the famous Mongolfiere restaurant. Next day we bunkered diesel at Cap d' Ail and anchored for the night in Baia St. Laurent.

July 22th we motored west along Beaulieu and anchored in Anse Scarletta, visited St. Jean-Cap-Ferrat with the dinghi and had dinner with a remarkable entrecote at Le Pirate. Next morning we took a walk around Cap Ferrat, sailed around the bay of Villefranche and further southwest around Cap d' Antibes into the canal between Iles de Lerins, where we anchored for two recreative days. As strong winds where expected, we sailed then into the old Port de Golfe Juan, where we stayed for 3 more days and visited by train Nice and Antibes, where we had a exceptional menu at Le Vauban. In Golfe Juan we had a genuine Bouillabaisse at Le Bistrot du Port and a nice Vietnamese dinner at Mai Linh. 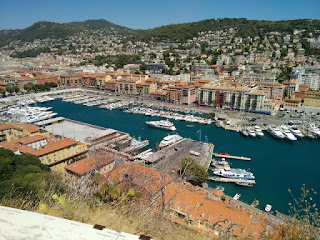 With less, but enough wind we sailed southwest to Rade d' Agay, where we spent the night at a bouy rather bumpy by swell. Next day we moored at Port Frejus, visited the city with cathedral and cloister and had a nice menu at L'Amandier restaurant. After bunkering some provisions  with strong northerly winds we sailed into Golfe de Saint-Tropez, when suddenly the genua came down with a loud bang. We provisorily lashed the sail and moored at the legendary port of Saint Tropez. When the wind got weaker, we were able to dismount the genua and found, that the metal shackle at the head of the sail was broken, the sail was intact. We strolled around Saint Tropez, visited the Castle and had a good barbecue dinner at La Ramade. After visiting le musée de l’Annonciade with beautiful impressionist paintings we motored back northeast and finally anchored again between Iles Lerins for two more nights and walked around St. Maguerite and rounded St. Honorat with our dinghy.

For an other good swim we sailed to Theoule-sur-mer on August 3rd and anchored south of Pte Aguille, enjoyed the sandy beach and had dinner at L'Aguille. Next day we carefully sailed around shallow Golfe Juan and finally moored again at Port Golfe Juan, where we had a Lebanese dinner  at La Cigale du Golfe and left our boat for three weeks.