My old sailing friends Gusti and Richard came on board on September 4th 2017 and we decided in unison on a trip to Venice. So next morning we set sail across Kvarner Gulf, rounded Hrid Porer, and turned into Fazansky Kanal north of Pula and east of the Brijuni archipelago, where we finally anchored at Uvala Peroj 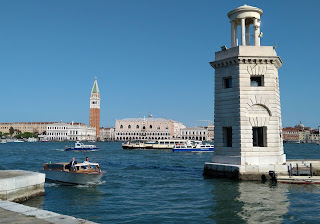 Early next day we continued north, visiting Rovinj, Vrsar, Porec, Novigrad and finally moored in ACI Marina Umag, where we had a surprising good dinner at Restoran Lido. At 6:30 next morning we declared exit and left Umag during some thunderstorms with convenient NE winds. Early in the afternoon we entered Venice through Porto Lido and moored at my favorite place at Compagnia della Vela in San Giorgio Maggiore across from Piazza San Marco. 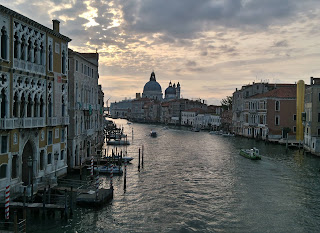 In rather strong rain we made a long round trip with the Vaporetto and enjoyed dinner at al storico da Crea. The following day we used the Vaporetto a lot travelling to Lido, Treporti, Burano, Murano and San Michele. In the evening we were enthusiastic about a dinner at Osteria Trefanti. 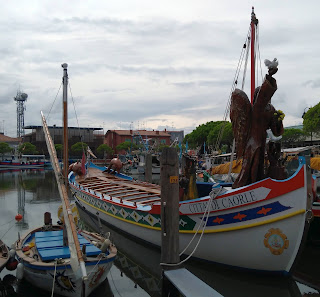 After an early morning stroll through the sleepy district of San Marco we set sail northeast along the sandy coast, entered Porto Santa Margherita di Caorle, and moored at Darsena dell’Orologio. We had dinner at Il Brigantino. At night we experienced thunderstorms with strong SE winds and heavy rain, which continued throughout next day. In the afternoon Richard was adversely affected by respiratory distress. An emergency doctor who arrived at once transferred him to Ospedale di San Donà di Piave. There it was decided to transport Richard back to Vienna, perfectly organized by the Austrian Automobile Club ÖAMTC. On account of the perfect cooperation of all  professionals involved I am happy that Richard is now in good health in Vienna again. 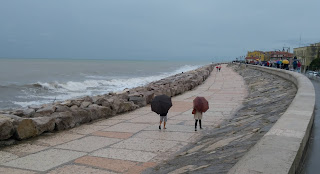 Because of strong onshore winds and heavy rain Gusti and I had to stay for another day in Caorle, where we walked in stormy weather along the Lungomare and had very good pizzas at Ae do Rode. On September 9th we were able to leave Caorle and with second reef and gusty 7 bft winds we reached Umag, where we declared entry and moored in the ACI Marina in heavy thunderstorms. 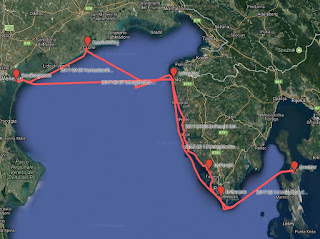 In the evening we walked to the old center of Umag and had a nice rustic dinner at Konoba Kaleta. Next morning we sailed south along the Istrian Coast and anchored in Uvala Banjole. Next morning we rounded Hrid Porer and with comfortable southwesterly winds sailed north to Cres, where we finally moored at out berth in ACI Marina Cres. We celebrated the finally positive completion of our eventful cruise at Restaurant Riva.

You may download our track in gpx-format
or view it directly on GoogleMaps.