"Sailing to Korcula" - Laguna di Marano to Dubrovnik in 8 Days 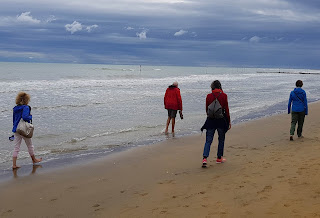 On a cold winter night in Vienna at a crew-meeting a visionary idea was developed: "Sailing to Korcula". This idea grew steadily and so my crew (Eva, Evi, Ilse, and Jutta) arrived in Marina Stella on Friday, August 24th for realization. But heavy rain, thunderstorms and strong onshore winds delayed our departure until Monday 27th. In the meantime we visited Aquilea, Grado and Palmanova by car, walked the beach at Lignano Riviera and visited nice restaurants at Ristorante La Darsena and Ristorante 900 all'isola. 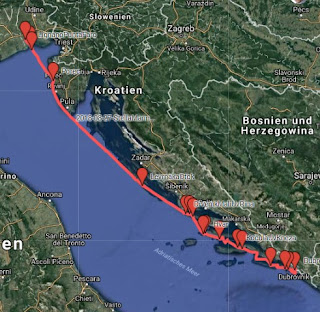 Finally on Monday 27th we sailed through Laguna di Marano and set course south. After some hands-on training and MOB-exercises we arrived in Porec, where we declared entry in Croatia and filled our diesel tanks. To make up for our delay we sailed southeast through the night with nice northwesterly winds passing Susak, Premuda, Dugi Otok, and finally entered Kornati islands at Sestrice lighthouse after 28 hours and 155sm. We moored at Konoba Levrnaka , jumped into the clear water, explored this beautiful island and had a nice fish-dinner. 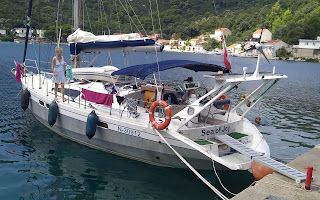 Early on Wednesday, August 29th with good wind we sailed through the Kornati archipelago, passed Otok Zirje and Hrid Mulo and anchored in Uvala Solinska east of Drvenik Veli and prepared pasta con tonno. Next morning after a short stop to buy fresch bread and fruits in the nice harbor Maslinica west of Otok Solta, we explored Pakleni archipelago, visited Hvar harbor and continued to Otok Skedro, where took a buoy in Uvala Moster (Mastir), took a walk to the old monastery, and had a wonderful grilles amberjack prepared skillfully by the friendly Kordic Family . 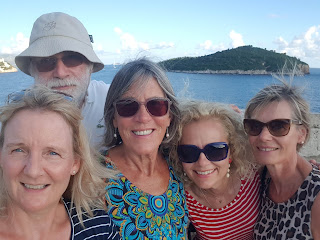 Friday after some nice sailing and swimming at Otocic Mala Kneza we reached the zenith of our cruise, the harbor of Korcula. We explored the medieval town, its churches and towers, and had a inspiring dinner at Aterina Restaurant. Next day we tacked against a fine southerly breeze and finally moored at Konoba Maran in cozy Uvala Okuklje in Otok Mljet. We enjoyed swimming in this picturesque and secluded bay and enjoyed an exquisite dinner at this Swiss-Croatian restaurant. 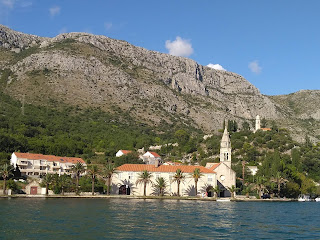 At sunrise we walked around the bay to St.Nicolas church, had another good swim and set sail east to Lopud, where we could not find a secure ground for our anchor. So we finally arrived at Uvala Donje Celo west of Otok Kolocep, anchored there and relished a hot vegetable risotto onboard. In the night we encountered some lightening and a short squall.


You may download our track in gpx-format or view it directly on GoogleMaps.
Posted by Rupert Nagler at Wednesday, September 05, 2018