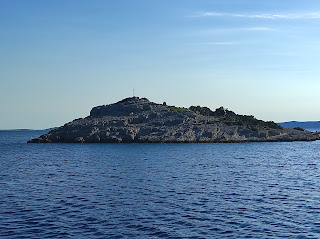 After a good fish dinner at Gostilna Sonja my wife Ilse and I started our next cruise on Sunday 17th July from Marina Izola. With nice north easterly winds we rounded  Savudrija with its prominent lighthouse, passed Umag, Novigrad, Porec, Vrsar, Rovinj, and slipped thru the passage between Crveni Otok and Sveti Andrija. For the night we dropped anchor at our favorite place in Uvala Polari. 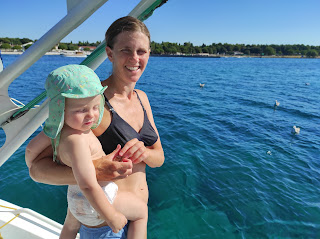 Monday morning we declared entry at the then open harbormasters office in Rovinj. With nice northerly winds we sailed south of Brioni island, passed Pula and then the southern tip of Istria with the famous lighthouse Porer. The wind took us over the Kvarner Gulf into the southwest of Losinj, where we anchored in Uvala Tomozina in clear waters but extreme hot and gusty winds. After a nice onboard pasta we spent the night with very high temperatures.

Next morning we sailed south round Rt Kurila with strong northbound currents and continued to Rt Kornu, the south eastern tip of Mali Losinj. Then we turned north again through Sidriste Orjule and headed northeast to our first destination, the island of Rab, where would take a young crew on board. Passing the tiny islands of Oruda and Dolfin we reached Rab at Uvala Litovica, where we anchored in clear turquoise waters in the middle bay and spent a quiet but very hot night.

Next afternoon we examined the different bays to the east and finally moored at ACI Marina Rab. We had a nice dinner at Restaurant Velum with fuzi with truffles, gnocchi with shrimps, and special velum salad. 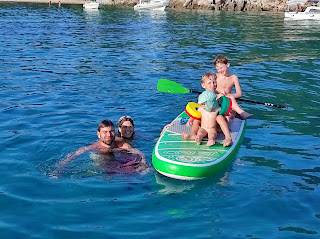 On Thursday 21st, July our young crew - our grandchildren Louisa (1y), Valentin (4y) and Laurenz (7y) came on board with their parents Sophie and Christian. After bunkering diesel at the Rab fuelstation at the special price of 1.84 Eur (Croatia's government just set a price limit to fuel) we sailed back to our anchor place in Uvala Litovica, where we spent 3 nights swimming and playing with our grandchildren. We had to fight the heat and an incredible number of aggressive wasps.

To fill up our water tank and having a dinner at Restaurant Ana we spent one more night at ACI Marina Rab. 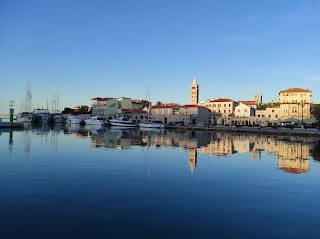 As the weather forecast and Windfinder promised a calm night we took the risk and sailed eastwards through Barbatsky channel into Velebitsky Kanal and spent the next night at anchor in Uvala Mag in beautiful bizarre moon-like surroundings.

Tuesday 26th forcast called us back with a storm warning. So after a proper MOB training we sailed back westwards through Barbatsky channel into Uvala Sv.Fumija south of the wonderful gardens of Rab and anchored carefully for a stormy afternoon and night. Next morning we swam to the near shore and explored the wonderful botanical gardens and cemetery of Rab. In the afternoon we moored again in some thunderstorms at ACI Marina Rab. In the evening the whole crew had dinner again at Restaurant Velum and in the evening until midnight we enjoyed the annual medieval festival "Rabska Fjera" in the crowded city with processions, tournaments and fireworks. 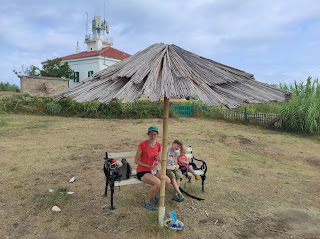 On the 28th of July Christian and Valentin left for Carinthia by car. With the rest of the crew we sailed southwest to Male Orulje, where we spent the night at anchor. Next morning we sailed futher west and moored alongside in the tiny harbor of our favorite island Susak for two leisurly days on the sandy beach and had a good dinner at Konoba Barabara. We walked to the lighthouse and bunkered wonderful bread at Bakery Sv.Catarina. Because of the hot weather it was not possible to get any water from the town quai. 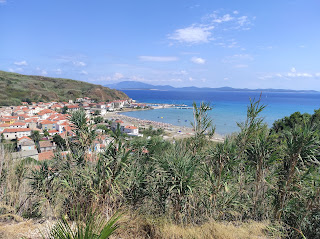 With a nice weather forecast and friendly westerly winds we crossed the Kvarner Gulf, rounded lighthouse Porer, tacked west of Pula and the Brioni islands and reached after 60 sm and 10 hours of nice sailing our favorite anchor place Uv Polari south of Rovinj, where we spent three quiet nights swimming and playing. 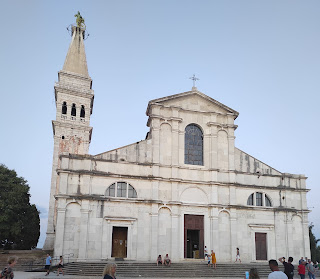 Wednesday, August 3rd we moored at ACI Marina Rovinj. Drinking water was in short supply. Christian arrived with Valentin by car to take Sophie, Louisa and Laurenz with him to back Carinthia.

We all had an excellent farewell dinner at Snack Bar Rio and a long stroll round the crowded city.

Next morning my wife and I alone started the last leg of our cruise and sailed with nice westerly winds to Uvala Sv.Martin and spent 2 relaxing days at anchor swimming, reading, and cooking chanterelle mushrooms with pasta, which Valentin had collected for us in Carinthia. 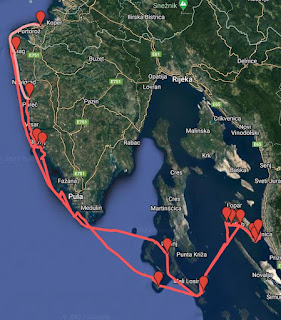 Early on Saturday, August 6th we got a storm warning for the northern Adria for the late afternoon. So we set sail for Umag to declare exit, rounded Savudria, passed Piran and luckily reached our mooring place in Marina Izola just in time for a heavy thunderstorm to start. In the evening we enjoyed a nice turbot from the oven at Gostilna Sonja. On Sunday we visited Trieste by car and celebrated our cruise with an incredible fine 5 course dinner in Michelin-starred Hisa Torkla in the beautiful hills north of Izola.
Due to the extreme hot and dry weather the water supply in Marina Izola was very limited. Next Monday we returned home by car to Austria.