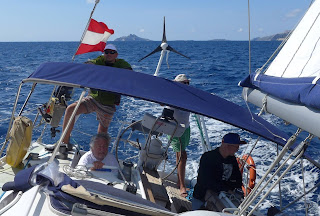 My next crew Robert, his son Konsti, Richard and Gusti arrived in Nice and we set sail southwest for Iles Lerins with a forecast of a westerly 5 bft on September 5th.  For the first 4 hours it was nice sailing with lot of tacking, but near Cap Antibes the wind got stronger and very gusty up to 35 knots and unexpected high waves. For my new crew it was a rather tough test on their first sailing day, which they mastered professionally. A bit tired we anchored northeast of Ile Maguerite and then moved into the canal between Iles Lerins in the evening. 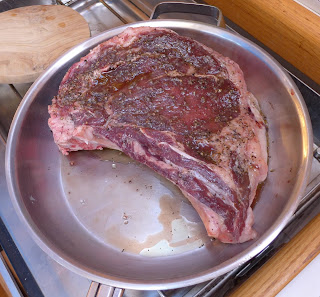 Next day we sailed further southwest to Saint Tropez with slight easterly winds and finally anchored in Anse des Canebiers, where Robert and Konsti prepared an exquisite Cote du Boef and made the whole crew very happy. 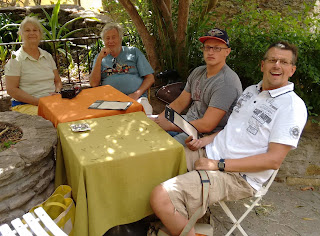 September 7th we motored west and took a nice swim at beautiful Baie Briande. In the afternoon we sailed to Bourmes Les Mimosas where we moored in the nice marina. The weather forecast for the next days was rather grim, so we decided to stop for 2 nights and visit the picturesque village of Bourmes up in the mountains and had a nice dinner in the marina at La Brasserie du Port.
With strong easterly winds we sailed next day at good speed around Ile de Port-Cros, through Seche de Ribaud, passed Cap Sicie, navigated through the shallow Passage du Embiez and finally anchored on sand northeast of Ile Embiez in Pointe du Canuvie.

In the morning of September 10th we motored further west and passed the beautiful calanques, through Plateau des Chevres and then north into the Bay of Marseille, where we finally moored in the port of Iles du Frioul. Next day we motored into Marseille Vieux Port, which was completely full for a planned regatta and then sailed back east to Cassis, where we had a extraordinary dinner at the small restaurant La Defonce. Next day Robert and Konsti had to leave for their flight back to Vienna. Gusti, Richard and I stayed in port for two more nights because of very bad weather. So we visited La Ciotat and Marseille by train. 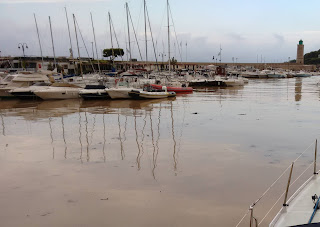 In the night to September 14th we had a very strong thunderstorm and the steering console AP20 for my Simrad autopilot died after 12 years of good service. After some fiddling with electronic circuits I was happy to replace it with a hand held remote device AP21. The streets in Cassis were a mess of mud and debris. Water in the port was of bright yellow color. So we left Cassis, motored into Calanques d'En Vau, Port Pin and Port Miou, and sailed back east with strong westerly winds and finally moored in Vieille Darse  in Toulon, where in the evening we had to look for two hours for an open restaurant in this dead looking city and finally found Le Bistrot de l'Opera  for a well-aged cote de boeuf.

September 15th we sailed further east with nice southwesterly winds and passed Caps Meridonal, Benat, Ladier, and Cap Camarat and anchored again in save Baie des Canubiers east of Saint Tropez. After a quiet night we continued east tacking in rather strong northeasterly winds in 2nd reef and spent the night at anchor south of Ile Maguerite. Next day we rounded Île Saint-Honorat and moored safely in the old port of Cannes and had a luxury dinner at restaurant Mantel. After a day of sightseeing Gusti and Richard left for Vienna and I waited for my last crew to arrive for our final cruise to Licata. 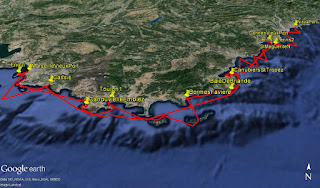