Together with my sister Gabriela and her friend Herbert I came back to Cres by car on Sunday 9th July 2017. Next morning after bunkering some supplies we set sail south with weak westerly winds and anchored near Osor in quiet Uvala Radiboj. Next morning at 9:00 am we passed Osor channel southwards, rounded the south coast of Otok Cres and finally anchored in Uvala Meli. We swam to the sandy beach and had a nice walk in the dense woods. In the evening we experienced a violent but short thunderstorm with 8 bft gusts.

Next day at noon we passed the harbor of Veli Losinj, motored though the crowded channel between Otok Ilovik and Sv.Petar and spent the night at a bouy in Luka Krivica. Next morning with choppy northeasterly winds we set sail at first reef and tacked north with nice speed to Uvala Ustrine, where we anchored in the quiet north bay. The autopilot ceased working - all hydraulic fluid was gone. We decided to repair it when back in Cres Marina. 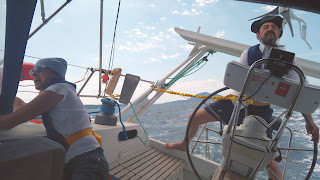 On Friday we continued sailing north with 6 bft northeasterly wind and 2nd reef with Herbert at the helm heroically fighting the gusts. West of Rt.Pernat the wind suddenly ceased and we ended this cruise moored save again in Marina Cres. Herbert helped me change the hydraulic cylinder with some tricks known only by a mechanical engineer. But then we found that one of the hydraulic tubes was also broken and I decided to have all three of them replaced. We celebrated our relaxing cruise with a fine grilled turbot and some Malvazija Istarska wine at Restaurant Riva.


You may download our track in gpx-format
or view it directly on GoogleMaps.
Posted by Rupert Nagler at Sunday, July 16, 2017