As usual weather deteriorated when my old sailing friends Gerhard Rothfuss and Gerhard Westphal came on board to sail along the last leg of our cruise to Alghero.  So August 25th 2013, when we sailed to Capri, we had a heavy thunderstorm with strong hail and 8 Bft gale. We ran for shelter east of Faraglioni rocks and then anchored near Marina Piccola.

Next day in high waves, nice weather and nice wind we rounded Capri and sailed to our usual anchor place in Ischia Ponte, where we enjoyed again a  nice dinner at Da Ciccio. Next morning we sailed north to Gaeta, where we moored at Base Nautica Flavio Gioia in heavy rains and had a four course fish dinner economically priced at Trattoria la Cianciola. 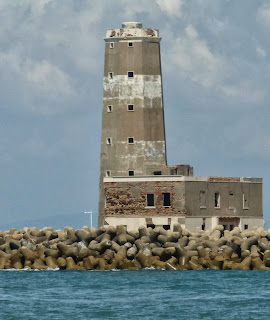 Next day we bunkered food and gasoil and sailed tacking north to Anzio, where we arrived late at night and anchored between Anzio Harbor and Nettuno. Early next morning we proceeded via Ostia and Fiumiccino to Santa Marinella, where we anchored in front of the harbor. On August 30th we sailed further northwest via Civitavecchia to Porto Ercole where we moored at Pontili Albatros  and had a fine dinner at Il Gambero Rosso. 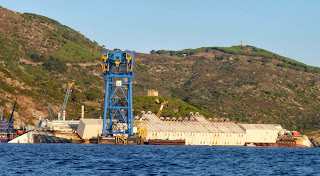 Next morning we sailed first to Isola Gianutria, where we anchored in Cala Schiavone and enjoyed swimming in clear turquoise waters. Then we continued north to Isola Giglio, where we found the wreck of MS Costa Concordia in front of the harbor, the works for righting her up in full progress. We anchored near Punta Smeralda and ate pancakes with the inimitable apricot jam cooked by Mrs. Westphal.
Next day we sailed further north to Elba, visited various bays and anchored finally east of Marina di Campo. 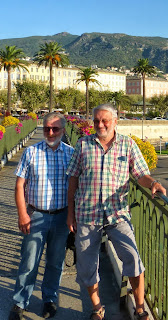 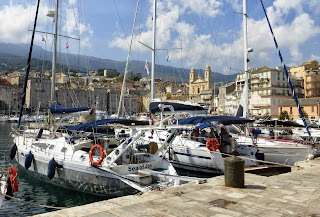 On September 2nd we left Elba and headed west to Corsica, where we were lucky to find a mooring place in Bastia Vieux-Port. We bunkered some food and had a good dinner at A Casarella. Early next morning we took the small train to Corte, where we visited the old town and its castle. In the afternoon we sailed south during the night and anchored at 5am east of Porto Vecchio in Baie di Stagnolu. 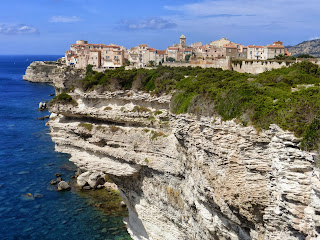 After getting some sleep we explored the large bay round Porto Vecchio and continued southwest thru the famous Piantarella Passage to Bonifacio, where we moored near the Capitanerie. We climbed up to the old town and had dinner at Cantina Doria. Next day we explored the impressive surroundings of Bonifacio, had lunch at La Poudrière and dinner at Kissing Pigs. 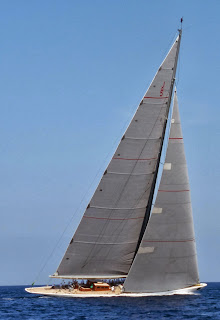 On September 6th we rounded the Maddalena Archipel and encountered a lot of Maxi Yachts racing for the Rolex Cup. Finally we anchored in quiet Liscia Bay and Dr. Westphal cooked his famous "Erdäpfelgulasch". 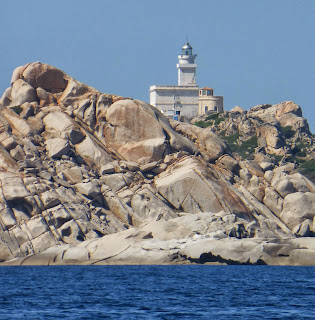 Next morning we rounded Capo Testa and after some nice sailing we moored in the harbor of Isola Rossa.

Next day we sailed west passing CastelSardo, tacking in Golfo Asinara and finally moored in Stintino , where we were in the middle of a Processione a Mare for la Beata Vergine della Difesa  and enjoyed long fireworks with music. On September 9th we rounded Isola Asinara in very nice winds, speeding us up to 9 knots and had a delicious fish dinner back in Stintino at Da Antonio.

Early next morning against a rather heavy northwest wind we ventured the famous Fornelli Passage. Once through we turned south and sailed along the commanding west coast of Sardinia, passing Capo Argentiera and Isola Plana on our rainy way to Alghero, where we moored at our final destination in Marina Aquatica  in Alghero.

The next days we explored the beautiful city and surroundings of Alghero  with our resident friends Ilse, Francesco, Willy and Milly. On September 14th we took our friends for a nice sailing trip from Lazaretto, Capo Galera, Porto Conte, Capo Caccia back to Alghero. 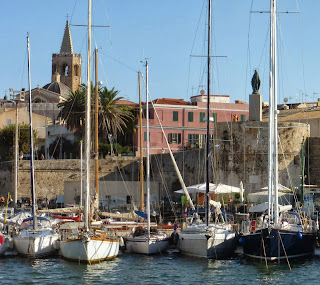 We sailed 678sm in 130 hours. You may download our track in gpx-format or view it directly on Google Maps