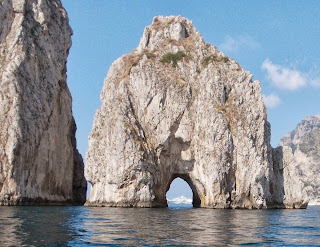 My next crew consisting of four competent and well-trained ladies arrived in Marina di Stabia on August 17th 2013. We celebrated the start of our cruise with a delicious fish dinner at Piazetta Milu. Next day we sailed via Golfo di Sorrento to Capri, where we anchored south of Marina Piccola and I cooked my well-tried Risotto al Limone. 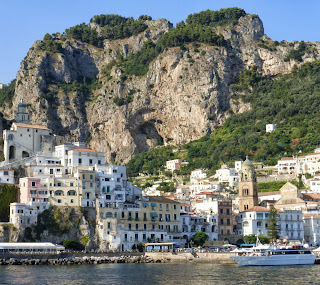 Next day we sailed east via Positano to Amalfi, where we again moored at Aniello Esposito's place and had dinner at Ristorante Il Mulino.
In the morning, after a good breakfast at the traditional Pasticceria Pansa and some shopping we sailed northwest to the small harbor of Marina di Chiaiolella. We enjoyed a good dinner at Ristorante Crescenzo. 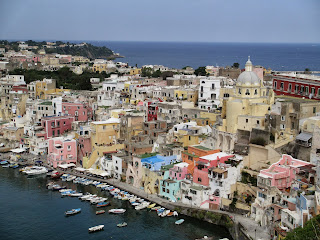 Next morning we went to Procida town by bus and visited the castle and the old churches. After a swim we tacked northwest to Ventotene, where we anchored east of the harbor. Because of high waves and a lot of northeasterly wind it was not advisable to use the dinghi for landing, so we stayed onboard. Next morning the wind decreased and we sailed back to the south coast of Ischia, where we stopped for a nice swim at Maronti Beach.

In the evening we sailed further east to Ischia Ponte and anchored again south of Castello Aragonese, where we savoured a nice local dinner at Da Ciccio. On August 23rd we sailed back to Marina di Stabia for the last crew change, where we celebrated this nice cruise with my crew at Ristorante President  with a delicious menu accompanied by a local tenor, who gave a concert in nearby Piazza Schettini in Pompei.


We sailed 168sm in 39 hours. You may download our track in gpx-format or view it directly on Google Maps.
Posted by Rupert Nagler at Saturday, August 24, 2013