Sandy beaches and some Bora 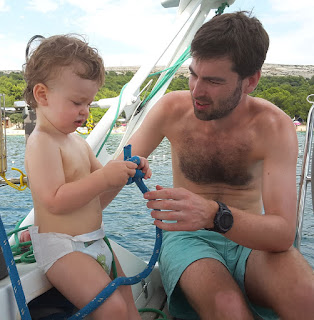 On August 13th Sophie and Chris arrived again on board with their son Laurenz for another cruise. They both climbed the mast and helped me replace the broken shackle of the genua head. August 15th we sailed south into the small and quiet bay Radiboj in the north of Losinj Island, where we anchored for the night in turquoise waters. 18 month old Laurenz enjoyed swimming with his parents. Next morning just on time at 09:00 local time we reached Osor and passed the turning bridge through Osor channel southwards. We reached the island Orulje Male and spent the afternoon and the night again at anchor in beautiful surroundings with a specific Caribbean feeling. 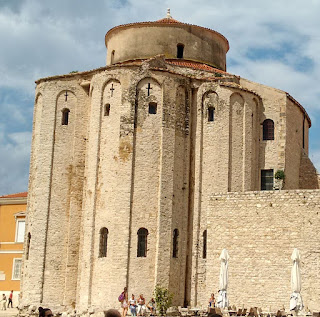 Next moring we sailed east with Slight westerly winds brought us further east to Island of Pag, where we anchored in front of the crowded beach of Camping Simunj. We enjoyed the beach, beautiful weather, and late at night fireworks just in front of our boat. The following day we left at noon south for Zadar harbor, where we moored at Tankerkomerc Marina and visited the old city and had dinner at Konoba Donat. After an early morning thunder storm with a lot of rain, thunder and lightning we continued sightseeing and replenished our provisions.
Early afternoon we set sail again north and anchored at sandy Zaton Beach for the night. 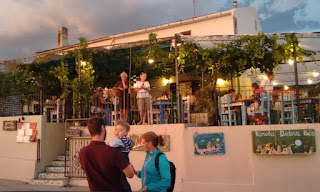 On August 20th we strolled along Zatons's Sepurine beach and then continued north to Sapavac bay in the south of island Vir, where we anchored again near the sandy beach, which Laurenz enjoyed. Next day at noon we received a gale warning up to 9 Bft. So we sailed further north to ACI Marina Simunj where we weathered this rather strong Bora for the next three days hiking, playing, and having nice dinners at Konoba Didova Kuca. 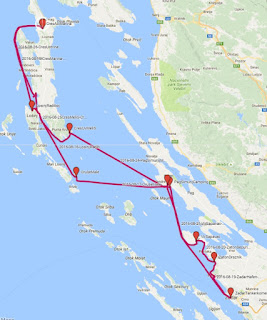 With weakening winds we sailed north to Uvala Meli in the SE end of Cres, where we anchored again and Laurenz and his parents enjoyed their favourite sandy beach. On August 25th we sailed north with rather strong westerly winds, slipped through Osor channel at 17:00 and anchored in Uvala Ustrine for the night. The last day of our joint cruise we were happy to sail north with firm westerly winds right into Cres Marina, where we met my other grandson Jonas and his parents Matthias and Isabella. So we spent a rather crowded night on board with two young sailors and their parents.

or view it directly on GoogleMaps